Spirituality in the Marche

The hermitage of Fonte Avellana is situated on the slopes of Mount Catria (1701 m.), about 700 m. above sea level. Its origins date back to the year 1000 but it has been shown that during the last decades of the l0th century, several hermits chose to live in this solitary mountain setting in a wooded area with plenty of hazels (“avellane”) and a spring (“fonte”).

The spiritual life of the hermits was certainly influenced by Saint Romuald of Ravenna, the father of the Congregation of the Camaldolese Monks of the Order of Saint Benedict. In fact he lived and was active between the 10th and the 11th century in areas very near to Fonte Avellana, like Sitria, the Mount Petrano and San Vincenzo al Furlo. Many of the hermitic habits in Fonte Avellana were more or less identical to the usages in Camaldoli and in other places following Saint Romuald’s inspiration. Also the Regula vitae eremiticae, which Saint Peter Damianus wrote for Fonte Avellana, has many doctrinal elements in common with the Costitutiones of the Blessed Rudolph, the 4th Prior of Camaldoli.

The development of Fonte Avellana started with Saint Peter Damianus. Not only did his strong personality shape the original nucleus of the hermitage. Even more, it was because of his spiritual, cultural and organizing impulse that the hermitage became a centre of attraction and for spreading the monastic life and exerted a great influence in religious reformation and in social life.

Thanks to this remarkable monk and churchman, the Avellanese and Camaldolese monachism could present itself, through its many hundreds of years of history, as a qualified christian experience. Proof of this is the fact that about fifty bishops and a large number of monks well known for their holiness and doctrinal knowledge came from this hermitage. According to a steady and very ancient tradition even the divine poet Dante Alighieri was a guest in this monastery and mentioned it in his Divine Comedy:

“Between two shores of Italy rise cliffs,
And not far distant from thy native place,
So high, the thunders far below them sound,
And form a ridge that Catria is called,
‘Neath which is consecrate a hermitage
Wont to be dedicate to worship only.”

The Annales Camaldulenses derive this tradition from other earlier historians and report that in the year 1318 the divine poet was a guest of Bosone of Gubbio and in that year he came to visit Fonte Avellana. Consecrated as an abbey in 1325, Fonte Avellana became a social and economic power and, a short time later (1392), was subjected to the practice of the grants in commendam (14th to 15th century).

The commendam meant the granting of benefices or goods belonging to a monastery or an abbey to foreign people, mainly persons of high clerical and civil rank for the sole purpose of enriching them. This is the reason why the commendam is regarded as a calamity, one of those evils that played a great part in the moral, as well as material, decline of many monasteries.

Fonte Avellana remained “in commendam” until almost the end of the 18th century and, although some commendators, such as Cardinal Giuliano della Rovere (later Pope Julius II), left respectable works of construction and improvement, the hermitage suffered deeply under the inevitable effects of the commendam. Therefore the decline of its monastic life was, though slow, nonetheless inexorable.

This decline ended as Napoleon in 1810 and then the Italian State in 1866 suppressed the monastery. Nevertheless Fonte Avellana continued to exist as if it were nourished by some internal spring and today, back in the hands of the Camaldolese monks, it has found again the austere beauty of its architecture (10th to 19th century) – the structure has been now completely restored to its original beauty – as well as that faith and culture which have distinguished it since it was founded.

Outside the Frasassi Grottos, about 400 mt up in the mountain, is the 11th century Church of San Vittore alle Chiuse, one of the most interesting Romanesque churches in Marches. Built with a plan typical of Byzantine temples, a Greek cross inscribed within a square, it has 3 naves and apses and a truncated belltower. Before the church is a Roman bridge with a Gothic tower built in its defense, a spa facility and the ancient abbey, where a Speleological Museum is under construction.

Outside the Frasassi Grottos, about 400 mt up in the mountain, is the 11th century Church of San Vittore alle Chiuse, one of the most interesting Romanesque churches in Marches. Built with a plan typical of Byzantine temples, a Greek cross inscribed within a square, it has 3 naves and apses and a truncated belltower. Before the church is a Roman bridge with a Gothic tower built in its defense, a spa facility and the ancient abbey, where a Speleological Museum is under construction. 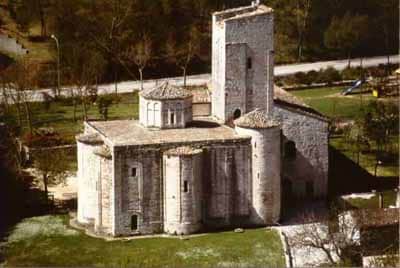 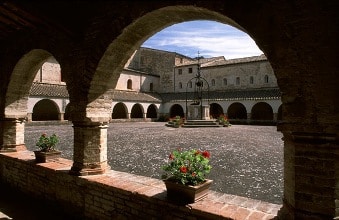 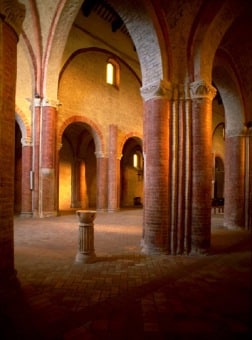 The serene Abbazia di Fiastre, that remains just south of Macerata, is one of the great Cistercian abbeys found under the wing of Clairvaux in France. Apart from the splendid setting, it has delightful frescoes by the Salimbeni brothers and a fine Renaissance cloister. Part of the building now houses an archeological museum with finds from nearby Urbs Salvia, and a collection of antique rural artifacts. The whole area is a Riserva Naturale, an idyllic spot carefully protected by the World Wildlife Fund. A few km south stand the remains of Urbs Salvia, a city founded in the 1st C. B.V. and, like so many of the Marche’s Roman towns, wiped out by Alaric in 408.