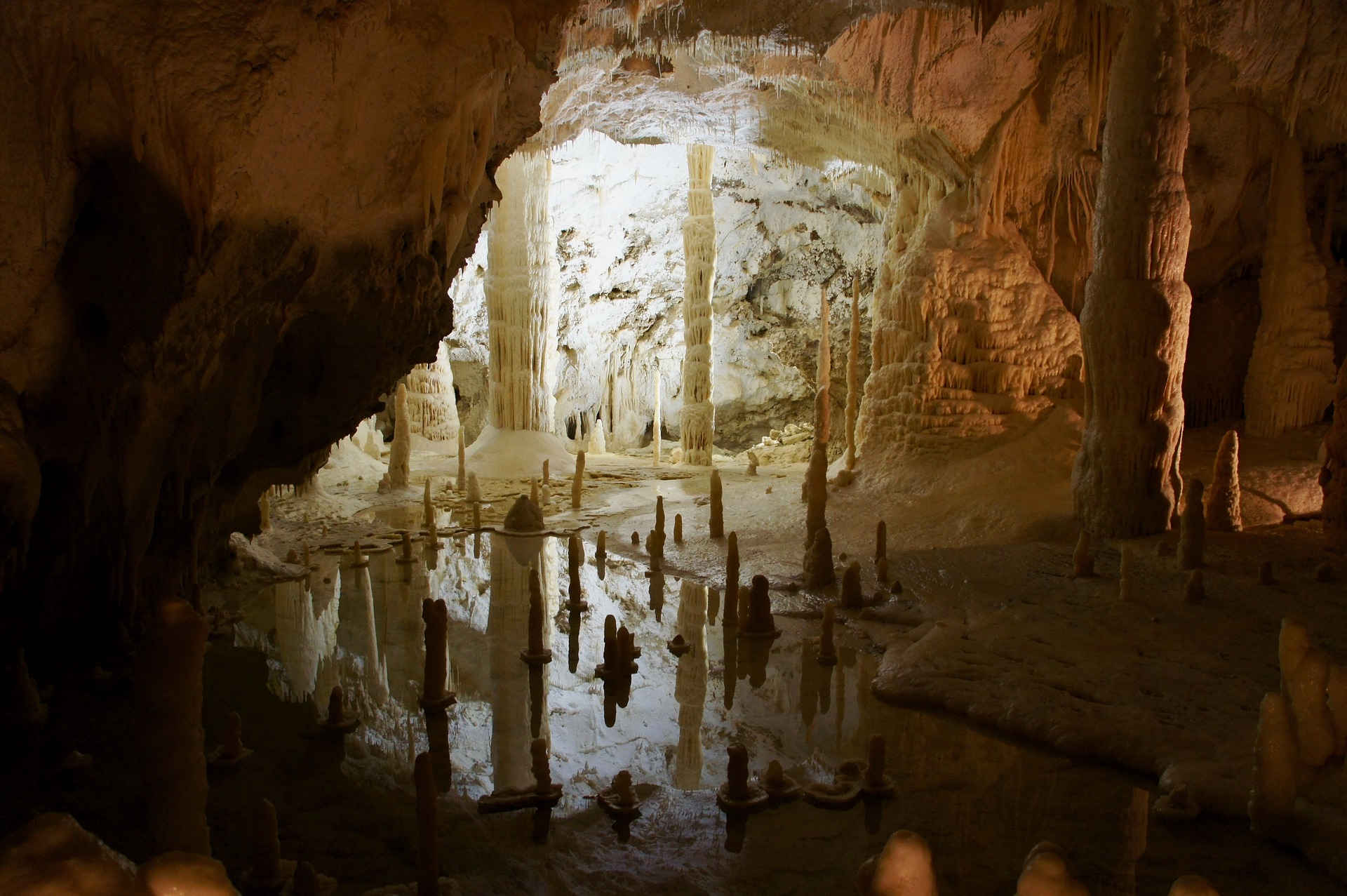 Amid the irregular scenario of the Apennine mountains lies one of the main speleological sites in Europe, the Frasassi caves, inside the uncontaminated nature of a Regional Park, a complex system of caves rising over a deep canyon, where the pure waters slowly flow and continue to feed the chemical and erosion processes which make of this marvelous site a living environment, with formations growing according to the slow calendar of geological time.

The grottos were casually discovered in 1971 by the C.A.I. Speleologic Group of Fabriano-Ancona and the first part was opened to the public in 1974; the explored part is about 18 km. The grotto area belongs to theRegional Park Gola della Rossa and Frasassi, a green oasis where very rare plant species grow, such as the moeringia vescicolosa, and wildlife as the royal eagle, the owl, the peregrine hawk, the wolf, an area which includes 10 ancient communes, and 9 perfectly-preserved medieval castles, all of them well worth a visit especially for the photographer in search of magic, spectacular views.

The grottos were formed through a time span of over 1.4 million years by the Sentino stream which in its descent penetrated with its mineral waters the mountain rocks, and through a corrosion process created the concretions that make the grottos so utterly beautiful. The grottos, which are always at 14 degrees centigrade, can be visited throughout the year, and in summer also at night. So far over 10 million people have visited the grottos and admired this natural masterpiece, the tiny lakes, stalactites and stalagmites, alabaster and crystal arabesques, all made the more precious by the masterly lighting system devised by Carlo Cesarini (Senigallia 1905 – Rome 1996), an Italian scriptwriter of great renown in the 1970’s and 80’s.

The Grotta del Vento, the longest grotto with its 14 km, so called because of the many openings through which the wind blows in.

The Abisso Ancona ,this majestic cave, the largest in Europe, with a size of 180 x 120 mt and so high that it might contain a cathedral, is totally covered of concretions with the peculiar names suggested by their form: Giganti (= the giants ), cascate del Niagara (= Niagara Falls ), Albero morto (= the Dead Tree).

The Sala Duecento named after its length of 200 mt, contains concretions called the Castello delle Streghe (= Witches’ Castle), la Spada di Damocle (Damocles’ Sword) which is the biggest stalactite, and the Obelisco, a stalagmite rising 15 meters from the cave floor.

The Sala delle Candeline (Chamber of Candles) – an impossible creation of crystal-white concretions rising form a clear-water lake. The Sala dell’Orsa (She-Bear Chamber) where through innumerable aeons the water created the form of a majestic bear.

The Sala dell’Infinito a name suggested by the infinitee number of times that the first speleologist had to wander the grotto before being able to find the exit, includes strange formations called the Sala dei Pagliai (Haystack Room) and the Capelli d’Angelo (Angels’ Hair), extremely thin forms hanging from the vault.

The Gola del Furlo (Furlo Pass) is situated in the province of Pesaro, along the SS road n.3 Flaminia, 35 km far from Fano and 248 km far from Rome. It has a great historical fame for the works carried out by the Etruscans first, and then by the Roman Consuls and Emperors (massive walls, stone cuttings, galleries) as well as for being in the past the theater of great struggles.

The landscape is suggestive, picturesque, and wild. The rocky walls of the mountains Pietralata and Paganuccio, deriving from the erosion of the waters of Candigliano, elevate themselves for hundreds of meters over the green small lake and form the characteristic Gola del Furlo with its particular alpine aspect and unique charm transforming it in one of the most attractive places of Central Italy.

The waters of the river Candigliano flow into the historical river Metauro which reminds the defeat and the death of Asdrubale. The name of the locality derives from Forulus, that is the big Roman gallery opened in the year 76 A.D. by the Emperor Vespasiano, inside of which the road Flaminia passes still nowadays. Not far you can see the Abbey of San Vincenzo – also called of Petra Pertusa, from the very ancient name of the Furlo – a precious Romanesque work dating back to the 6th century, and the Sanctuary of the Pelingo (1820). The traditional excavation and working of the stone by local craftsmen is worth a mention.

Also fossils and minerals are extracted from the quarries: they are interesting from a scientific point of view and can be curious for the tourist. A few kilometers far from there, the ancient district of Acqualagna is famous as production and market area of the most valuable truffles in Italy: the appointment for the connoisseurs is at the National Truffle Fair (during the first fifteen days of November). The first ones to cross Gola del Furlo were the Etruscan people. Subsequently the Romans, who opened with the building of the Flaminia road a large tunnel which is still in use.

The river Candigliano, an affluent of the Metauro, crosses Gola del Furlo shaping the walls of Mt. Paganuccio (976m) and Mt. Pietralata (889m). More than 200 million years are told by the rocky walls of Gola del Furlo. Beyond the most ancient formations of solid Limestone, there are other rocky strata, among which the Cornelian, the “Calcari Diasprini” and “ad Aptici”, the Maiolica, the Marne a Fucoidi, the Scaglia Rossa and Bianca, up to the most recent formations (40 million years) like the Scaglia Cinerea.

There are several and different vegetation formations in the Furlo territory: from the riparian vegetation to the ilex groves with relicts of Mediterranean vegetation, from the oak woods to the mesophyle woods up to meadows and pastures situated at high altitudes. Among the rare species which are also interesting from a naturalistic point of view there are: Moehringia papulosa (endemic species), the Black broom (Lembotropis nigricans), the Avignon berry (Rhamnus saxatilis), the Iris (Irisgraminea), several orchids among which Dactylorhiza romana and Orchis morio, the Strawberry tree (Arbutus unedo), the European Hackberry (Celtis australis).

The presence of several birds of prey which use the walls of the Gola to nest and the meadows at high altitudes to hunt, gives to Furlo Reserve a high naturalistic value. Among the most interesting species it is possible to observe: the Golden eagle, the Sparrowhawk, the Goshawk, the Montagu’s harrier, the Peregrine, the Lanner. Other interesting Birds are: the Alpine Swift, the Crag martin, the Blue rock thrush, the Wall creeper, the Chough, the Dartford Warbler.

Among the several species of Mammals we quote the most interesting ones from a naturalistic point of view, like the Wolf, the Porcupine, and the Polecat. Among the Amphibians, the rested Newt, the agile frog, and the yellow-bellied toad. There are also several species of reptiles populating the area, among which the four-lined snake, the aesculapian snake, the asp viper, the dice snake. In the waters of the Candigliano it is possible to find species like the Cyprinids, Gobidae, and the Brown trout. 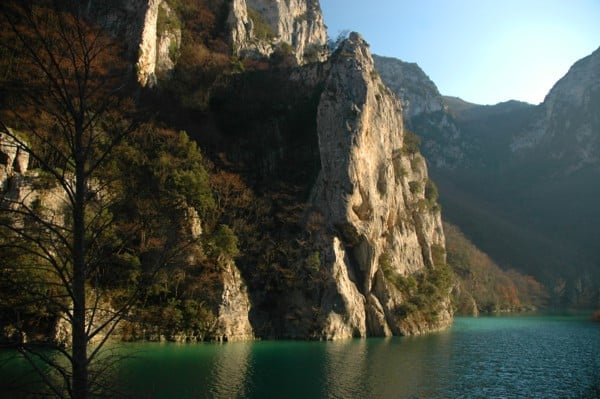 You can find a lot of information about the beautiful San Bartalo Natural Park along the Adriatic Coast at www.parcosanbartolo.it 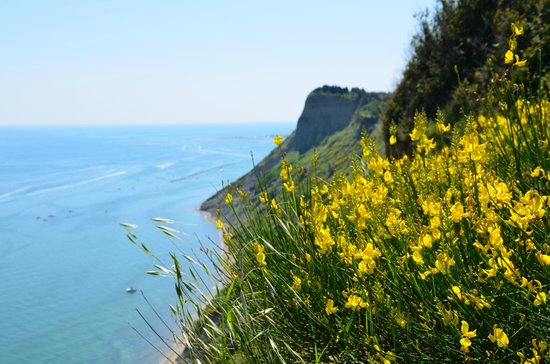