In the Marche region numerous artistic, cultural and folkloristic events are held during the year and especially during the summer season. Pesaro, for example, stages the “Rossini Opera Festival”, with famous contemporary maestros from all round the world reviving the entire works of the great composer from Pesaro. The city also hosts the”Mostra Internazionale del Nuovo Cinema”, with first and late national showings of films by the more famous and original Italian and foreign producers, the “Festival nazionale d’Arte Drammatica”, one of the most ancient and established theatrical events at national level, the Stagioni di Prosa at the Rossini Theatre.

The “Carnevale dell’Adriatico” held in Fano is a very popular event which includes the launching of sweets. The city also holds other summer festivals, theatre and music at the Corte Malatestiana and “Incontri Internazionali dei Cori Polifonici” in the restored Teatro della Fortuna. 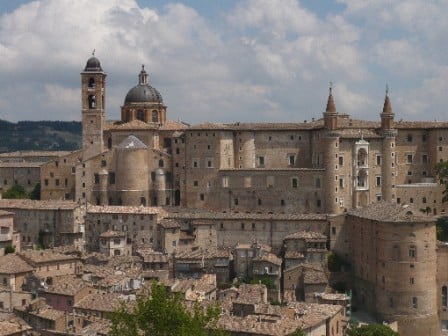 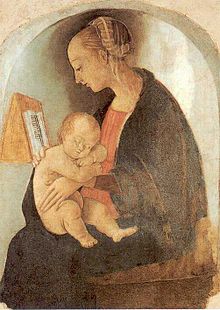 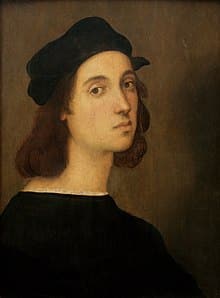 Urbino is a picturesque Renaissance hill town and the capital of the Marche region of central Italy. Although Urbino was a Roman and medieval city, its peak came during the 15th century when Duke Federico da Montefeltro established one of Europe’s most illustrious courts. Its impressive Ducal Palace houses one of the most important collections of Renaissance paintings in Italy.

Urbino has a university started in 1506 and it’s a center for maiolica ceramics, art, and culture. Urbino’s historic center is a UNESCO World Heritage Site. Urbino’s huge Ducal Palace,Palazzo Ducale, is one of the most impressive (and also the first) in Italy. The Ducal Palace was built in the second half of the fifteenth century. Top sites are the impressive Courtyard of Honor, the Duke’s study with stunning trompe l’oeil inlaid woodwork panels, and the vast network of kitchens, laundry rooms, cellars, and stables. It’s easy to spend several hours wandering through the palace and two musuems, the National Gallery and the Archaeological Museum.

The National Art Gallery of the Marche, has one of the most important collections of Renaissance paintings in the world. TheDuomo or Cathedral was constructed on top of a sixth century religous building. Completed in 1604, it was destroyed by an earthquake in 1789 and then rebuilt. The duomo now has a neo-classical appearance and houses several important art works, including a painting of the Last Supper by Federico Barocci. The Museo Diocesano has a collection of glass, ceramics, and religious items.

The Renaissance painter Raphael was born in Urbino (in 1483) and his family’s house is now a museum.

Urbino plays host to the Festival della Musica Antica, the famous Festa degli Aquiloni, a kite festival bursting with imagination and colour, and the Festa del Duca which revives events surrounding the Montefeltro family, returning the splendours of the Renaissance period to the town’s historic centre.

Cagli, a courtly little town at the confluence of the Bosso and the Burano, set against a backdrop of some of the highest peaks in the northern Marches, has welcomed strangers for over two thousand years, since the days when ancient Rome made it an important staging post on the Via Flaminia, one of the oldest and most important Roman roads in Europe. Cagli seems to have borne the name Cale, 24 miles north of Helvillum (now Sigillo) and 18 miles southwest of Forum Sempronii (now Fossombrone).

In the 6th century it was one of the strongholds of the Byzantine Pentapolis,along with Gubbio, Urbino, Jesi and Fossombrone. It was donated by Pepin the Short to the Roman Church (in 756) and having experienced the vicissitudes of the Guelphs and the Ghibellines, the latter partially destroyed Cagli (1287), subsequently the town (1289) in the lower level was rebuilt.

As a free community it experienced considerable growth and was subsequently incorporated into the Duchy of Urbino. The hand of the great military architect Francesco di Giorgio Martini is unmistakable in the dramatic oval torrione or tower to the west of the piazza, all that remains of the citadel that Duke Federico da Montefeltro had built above Cagli towards the end of the 15th century. From the same period are the medieval Town Hall (today the seat of the Municipality and the Archaeological Museum), as well as the medieval church of San Francesco and the Church of S. Domenico, both with valuable paintings.

In the church of San Domenico, for example, there is a fresco of the Madonna and Child with Saints by Giovanni Santi; the angel to the left of the picture is said to be a portrait of Santi’s better known son, Raphael. Similarly, the Cathedral, the churches of S. Angelo Minore, S. Maria della Misericordia, San Giuseppe, Santa Chiara, San Filippo and San Bartolomeo all have many fine works of art. Among the public buildings Palazzo Brancaleoni from the 15th Century, the 16th century Palazzo Tiranni-Castracani and theCity Theater from the 19th century are worth mentioning. The remarkable Ponte Mallio is a Romanesque monuments of great importance.

The beauty of Cagli as a town, however, is overshadowed by the natural splendour of its setting amidst some of the Marche’s most uncontaminated countryside A tortuous 10 km drive up from the town will take you to the windswept meadows 1108 m up on the summit of Monte Petrano, olympian views and a mass of wild daffodils in late spring.

To the east of Cagli stand the twin peaks of Monte Catria (1700m) and Monte Acuto (1527m), an untouched wilderness with breathtaking views. A road from the nearby village of Acquaviva winds up through meadows and beech woods to within a few hundred metres of each peak, before dropping back down towardsFrontone, or to Cantiano, beneath the western slopes. The journey is especially rewarding in May and June when the alpine flora in the upland meadows is in full bloom.

On Good Friday the Easter liturgy reaches its climax in the Procession of Cristo Morto. The late afternoon procession, after the deposition in the Cathedral, end in front of the Church of San Giuseppe, where the two images of Our Lady of Sorrows and Christ are brought before each other. In the evening, four hundred confraternity members, barefoot and hooded, from five confraternities form the religious procession that precedes the carriage bearing the veiled statue of the Dead Christ, in a ritual that has remained unchanged since the 16th. C.

By the end of April or beginning of May the Slow Food Organization and the city of Cagl organize the national charcuterie fair “Distinti Salumi”. During the three days of the festival Cagli opens its ancient noble buildings and turns them into tasting rooms, educational tours and educational sensory experiences.

At the beginning of June Cagli celebrates Corpus Christi in a beautiful procession. The streets are carpeted with flowers, arranged by local people and worshippers, as a demonstration of popular piety. In the procession a priest carries the consecrated host under a rich canopy, accompanied by memebers of the Confraternity of the Blessed Sacrament, in a tradition that has continued uninterruptedly since the 15th Century. 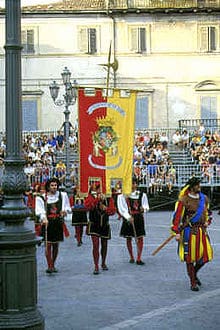 The Palio, Storico Giuoco dell’Oca: old rivalries between Cagli’s historic quarters form the background to this competition, which traces its history back to 1543. The eve of the event (the 2nd Saturday of August) begins with the investiture of the Captains and the offering of oil to the patron saint. In the evening traditional dished are being prepared in outdoor taverns set up for the occasion in different parts of the city.

On the day of the Palio, Sunday, the Magistrate, accompanied in procession, displays the trophy of the golden goose. Dice throwers move the score-markers of the respective Quarters on 54-square board, while young players battle each other in contests which move them backwards of forwards until the winner is proclaimed. In the evening there is a general celebration in the outdoor taverns.

At Cantiano, on good Friday, there is an age-old represenation of a passion play: theTurba. Its name derives, even if not directly, from popular movements of prayer for peace that swept the land of Marche and Umbria in the 13th C. and were taken into the streets and squares by people who were living in the most humble and miserable consitions, who were suffering and weary of the constant struggles between the pope and Manfredi and the constant warfare between Guelphs and Ghibellines. Men and women of all ages gathered in processions and invoked the intervention of the Holy Virgin Mother of God, travelling the roads of Umbria and Romagna.

Also Cantiano that year 1260 received the “mob” of people of all ages, poorly clothed or half naked, pleading for repentance in the dim light of flickering torches, the chants of “Miserere” that accompanied their suffering and redemption, beating and scourging themselves, begging for forgiveness, calling for peace and brotherhood. The supreme example of penance and sacrifice inspired by the passion and death of Christ, which eventually accepted the figure of Christ, developed into the sacred representation of the Passion with a repetition of the ritual, the characters (such as Jesus, the Priests, the Thieves and the Soldiers) and the dialogues. 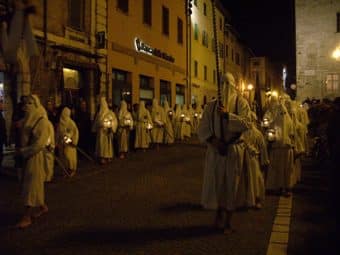 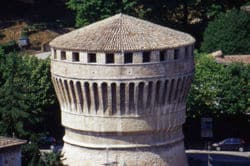 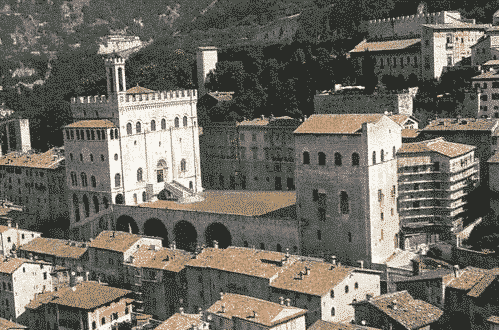 Gubbio is located in the north-east of Umbria, on the border with Marche (east), 26 km from Cagli. Predominantly mountainous area, bounded on the east by the Apennine range and west from the valley of the Tiber River, it is rich in natural beauty and treasures of art, where history, culture and landscape living together in a harmonic symbiosis.

Gubbio is famous for its festival of the Ceri. It is one of the oldest, if not the oldest Italian folklore display. The festival has always played a fundamental role in the heart of the Eugubina community. Its origins are obscure according to some documents it seems that the festival is a solemn act of devotion on the part of the Eugubini towards their Bishop Ubaldo Baldassini which started in 1160, the year of his death.

Since then, every 15th May, the eve of the day of mourning, the devotional offering to the patron Saint is a fixed appointment for the people of Gubbio who are said to have taken part in a great mystical procession, carrying candles all around the town and up Mount Ingino (where since 11th September 1194 the body of Saint Ubaldo lies, in the church which bears his name). Certainly, the Eugubini dearly loved their important townsman, especially from 1154 onwards, when Gubbio conquered no less than 11 allied cities. The victory seemed miraculous, and was also thanks to the intervention of Bishop Baldassini. The wax candles, offered by the Arts and Crafts corporations, probably became difficult to transport with the passing of time, and towards the end of the 16th century were substituted by three wooden structures, which were agile and modern. They have been replaced a number of times. They have kept their original form up until today and on the same date; they follow the same route to the same place.

Immersed in the rolling hills of the Valle del Cesano crossed by the river, lies the small and ancient town of Pergola. Founded in medieval times, the city lies at the heart of an area inhabited since prehistoric times. Ancient past remain in the historic center, in some corners of medieval tower houses, noble palaces, churches and monasteries. The city is famous for one of the rarest of Roman sculptures known as “Gilded Bronzes of Pergola”, housed in the ancient Church of St. James and adjoining convent. It is a group of gilded bronze equestrian sculpture found in 1946 near Cartoceto, town on the outskirts of Pergola, dating to the first century BC, and consists of two women and two knights of a high military rank, with ornate horses. 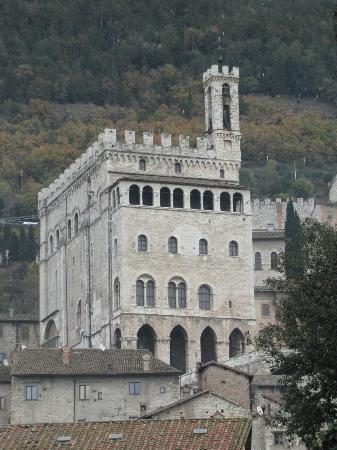